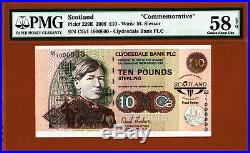 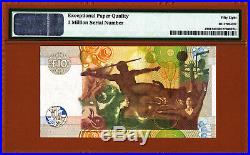 This Listing is for a Banknote of Scotland Commemorative 10 Pounds Issued in 2006 to Commemorate the Commonwealth Games in Melbourne Pick-229E having Very Special One Million Serial (1000000) Which is Rare and Hardly Found. Condition of the Banknote is About UNC Graded by PMG 58 EPQ. The item "Scotland 2006 Comm. 10 Pounds 1000000 (One Million) Serial P-229E PMG 58 EPQ" is in sale since Monday, July 18, 2016. This item is in the category "Coins & Paper Money\Paper Money\ World\Europe\Other European Paper Money".

The seller is "notescoinshobby" and is located in London, Ontario. This item can be shipped worldwide.