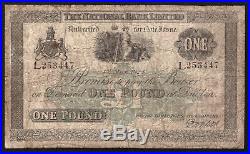 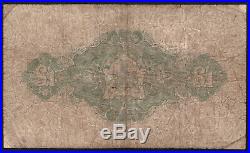 Grubby overall, 4 pin holes on left side, two small 3mm edge nicks on the top. The note still retains some crispness, and is a presentable example of a late pre-partition banknote.

National Bank notes are the scarcest of the Old note issues. Six of the joint Stock Banks in Ireland had the right to issue banknotes, and these issues formed the currency circulating on the island of Ireland prior to partition. Subsequently, the issues of the banks were replaced by the Ploughman and Lavery notes after 1928. Post Free to all Destinations.

The item "Ireland, National Bank, One Pound, dated 1 May 1924. VG" is in sale since Monday, August 12, 2019. This item is in the category "Coins\Banknotes\Irish". The seller is "irishpapermoney2015" and is located in Cambridge, Cambridgeshire. This item can be shipped to all countries in Europe, United States, Canada, Australia.