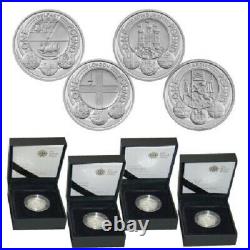 Belfast used a coat of arms on its seal as early as 1643, but it was not until 1890 that the arms were granted officially. The red cross and upright red sword in the top left quarter, is usually explained as combining the symbol of the Citys patron saint, St Paul, with that of Englands, the red cross of St George. Cardiff had long made unofficial use of the arms of the medieval lords of the area before it was granted city status on 28 October 1905.

Its Coat of Arms was granted in 1906, although the city was not proclaimed capital of Wales until 20 December 1955. The design of the shield is described as: Argent on a mount vert growing therefrom a leek proper a dragon rampant gules supporting a banner gules charged with three chevrons argent. It is not surprising that the fiery red dragon should feature so prominently in the Citys Coat of Arms since it has been recognised as the emblem of Wales for well over 1,000 years. It was a symbol favoured by the historic Welsh leaders and also by the Welshman Henry Tudur who claimed descent from Cadwaladr, the great Welsh King traditionally called the last King of Britain. The leek, too, is an historic symbol of Wales, having played a vital role in the battle of Heathfield in 633 AD when it was used to distinguish friend from foe.

The motto of the Citys arms, Y DDRAIG GOCH DDYRY CYCHWYN, has been chosen as the edge inscription and can be translated as the red dragon shall lead. The city of Edinburgh was properly granted its Coat of Arms on 21 April 1732 by the heraldic authority for Scotland, Lyon King of Arms. The shield can be blazoned or described as follows. Argent a castle triple-towered and embattled sable masoned of the first topped with three fans gules windows and portcullis shut of the last situate on a rock proper.

The castle triple-towered evidently represents Edinburghs magnificent castle which sits on the summit of the volcanic rock towering some 260 ft (80m) above its city. A stronghold and seat of royalty since the Middle Ages, it is visible for tens of miles in every direction. The item "Capital Cities of the UK £1 One Pound Silver Proof 4 Coin Set" is in sale since Thursday, October 17, 2019. This item is in the category "Coins & Paper Money\Coins\ World\Europe\UK (Great Britain)\Commemorative". The seller is "zdstamp_coin" and is located in Davis, California.