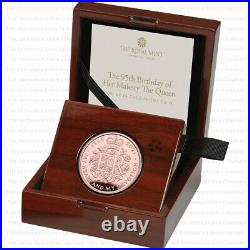 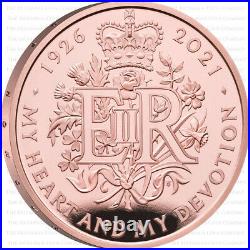 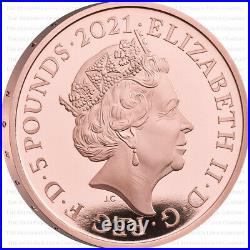 Just 655 of these individually boxed coins were struck for the limited presentation. Designing a Coin Fit for The Queen. Her Majesty's 95th birthday is such a special occasion that two reverse designs by Timothy Noad and Gary Breeze have been created as part of this 2021 commemorative coin series celebrating the royal milestone.

This particular coin features the design by Noad. Sculptor and renowned coin designer Timothy Noad took inspiration from The Queen's love of flowers and the natural world. The enwreathed design features a bouquet surrounding the Royal cypher. The bouquet or posy is symbolic of those gifted to The Queen on her birthdays. The depiction of the bouquet includes the emblems of the four nations; a thistle for Scotland, a rose for England, a shamrock for Northern Ireland and a daffodil for Wales.

The inscription in The Queen's own words is taken from an oath made in Her Majesty's first televised Christmas Broadcast in 1957,'MY HEART AND MY DEVOTION'. The promise acts as a motif for the series, appearing on every coin in this collection. The obverse hosts the 5th Portrait of HM The Queen, Elizabeth II, by Jody Clark. In 2021, Queen Elizabeth II became the first British monarch to reach a 95th birthday.

It is custom to mark The Queen's landmark birthdays with special events. Elizabeth II celebrated her 21st birthday in South Africa, where she made a speech dedicating her life to serving the Commonwealth nations. Her Majesty's 60th birthday featured a children's daffodil parade. At 80-years-old, The Queen toured the streets surrounding Windsor Castle.

On the occasion of Her Majesty's 90th birthday, a Royal street party was held along The Mall attended by 10,000 guests chosen by ballot. Aside from the usual commemorative china, Her Majesty's 95th birthday will be a much quieter affair to focus on the Duke of Edinburgh's 100th birthday. Nearly 70 years of Public Service. In 1926, Princess Elizabeth Alexandra Mary was delivered at 17 Bruton Street, Mayfair, London, and is the only British Monarch to have been born at a residential address.

Elizabeth II's accession to the throne took place on the death of her father, King George VI in 1952. The young Princess, now married to Prince Philip, was just twenty-five-years-old when she became Queen. Her Coronation at Westminster Abbey was the first to ever be televised, watched by 27 million people across the globe.

Her Majesty has devoted her life to public service. In 2015, The Queen crossed a new milestone, becoming the longest reigning British monarch of all time. Her Majesty's reign has witnessed numerous major events, which include. Roger Bannister achieving the four-minute mile in 1954.

The opening of the M1 - Britain's first motorway. The abolishment of the death penalty. England's 1966 World Cup win. The launch of decimal currency.

The Miners' Strike and the election of first female Prime Minister Margaret Thatcher. The Live Aid concert of 1985. The world's first test tube baby. Nelson Mandela's release from prison. The invention of the World Wide Web.

The UK both joining and leaving the European Union (EU). Barack Obama becoming the first black US President.

As Head of State, 14 British Prime Ministers and over 170 worldwide Prime Ministers have also served her since 1952. The Sovereign is also Supreme Governor of the Church of England and Head of the Commonwealth amongst Her Majesty's many titles. This Gold Proof Crown celebrates The Queen's 95th Birthday in a special design by Timothy Noad. Gold Proof coins are ideal for a serious collector or to be treasured as a piece of history or item of sentimental value. Produced at The Royal Mint, Proof coins represent the highest quality of commemorative coin, benefitting from unrivalled sharpness, detail and finish. Proof coins are struck in precious metals and hand-finished to remove all imperfections. These coins make the perfect gift to hand down to generations of family. They can also be given as a wedding, anniversary, birthday or special occasion present.

Monarch: Elizabeth II (1952- present). The Britannia Coin Company of Royal Wootton Bassett is part of Gold Traders UK Ltd. We've been trading since 2008 and pride ourselves in offering market leading prices for all types of coins from Royal Mint proof & collectable sets to hammered & ancient coins. Gold Traders prides itself on honesty, integrity and ensuring the best value for customers, which has earned the company many favourable testimonials and positive press reviews too.