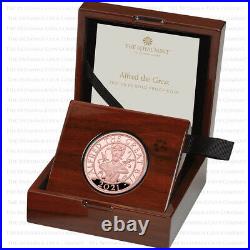 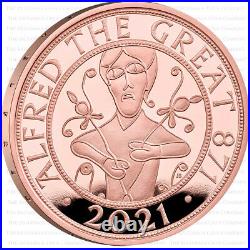 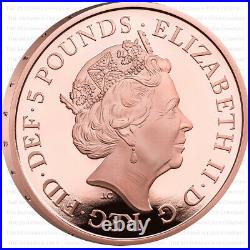 Inspired by a masterpiece of early medieval art, this 22-carat gold coin is an excellent acquisition for anyone who appreciates this mysterious period of British history. Alfred became King of Wessex in 871 while his kingdom was threatened by marauding Vikings. 1,150 years later, we remember Alfred for his success in pushing back his Danish rivals, becoming the dominant ruler among the small kingdoms that dominated the British Isles in the ninth century. Its not just for his dominance on the battlefield that Alfred alone of all the English monarchs is called the Great.

Alfred is also renowned for his peace efforts, legal improvements, support for learning, and military reorganisation, as well as his reputation for piety and fairness. Here at the Britannia Coin Company were also big fans of Alfred for his coinage reform. Bergdahl based his design on the renown Alfred Jewel, the star of the Ashmolean Museums collection. Found in a field in Somerset in 1693, the jewel is the masterpiece of early medieval goldsmithing, crafted around a vividly coloured piece of enamel work. It is thought that the treasure was originally the handle of a pointer stick, used for following words when reading a book.

In this instantly recognisable motif a man, thought to represent Christ, holds two ecclesiastical implements in his raised hands. The stylised figure is beautifully rendered in the central roundel of John Bergdahls design. The outer circle of the reverse design, separated from the inner by a beaded outline, bears the inscription ALFRED THE GREAT. 2021, clearly connecting the design to the King. The legend is presented in stylised lettering, copied from original medieval documents.

Its these words that unambiguously connect the jewel to the legendary Anglo-Saxon King, Alfred the Great. On the jewel, the words appear in openwork gold and form the fixture that attaches the rock crystal to the base. This effigy of Her Majesty is the work of Jody Clark, a Royal Mint engraver. Also provided with your coin is an illustrated commemorative booklet and a numbered certificate of authenticity.

Weve seen great demand for Royal Mint commemorative five-pound coins, particularly these gold proof editions. Between the masterfully rendered design and the unusual choice of subject in Alfred the Great well known among coin collectors we predict that this one will get snapped up quickly. Monarch: Elizabeth II (1952- present). The Britannia Coin Company of Royal Wootton Bassett is part of Gold Traders UK Ltd.

We've been trading since 2008 and pride ourselves in offering market leading prices for all types of coins from Royal Mint proof & collectable sets to hammered & ancient coins. Gold Traders prides itself on honesty, integrity and ensuring the best value for customers, which has earned the company many favourable testimonials and positive press reviews too. The item "2021 Royal Mint ALFRED THE GREAT Gold Proof Five Pounds £5 Only 140 Minted" is in sale since Sunday, May 9, 2021.

This item is in the category "Coins\Coins\British\Proof Sets/Coins\2000s". The seller is "britanniacoinco" and is located in Swindon. This item can be shipped worldwide.