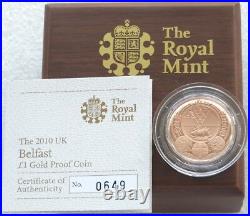 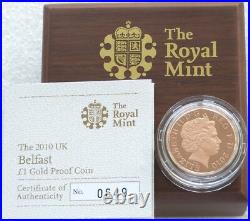 Metal: Solid 22 Carat Gold. Weight: 19.61 Grams / Diameter: 22.50mm. Presented: Original Royal Mint Box with it's Certificate of Authenticity. The reverse of the Belfast Coin shows the coat of arms of Belfast which was used as early as 1643, but it was not until 1890 that the arms were granted officially. This means that in the upper part there is a silver bell on a small red cornerpiece or'canton', and a larger triangular segment formed of interlocking blue and white pieces in a specifically heraldic pattern known as'vair'.

Belfast was always famous as a port and for shipbuilding. So it is scarcely surprising that a sea-going vessel should dominate the shield. The bell in the upper part is a simple reference to the city's name and appeared on tokens issued by Belfast tradesmen in the seventeenth century. The Obverse design is the stunning portrait of Her Majesty Queen Elizabeth II by Ian Rank Broadley. These legal tender coins have been struck to proof quality using specially prepared dies and highly polished blanks.

The item "2010 Royal Mint Cities of the UK Belfast £1 One Pound Gold Proof Coin Box Coa" is in sale since Saturday, August 31, 2019. This item is in the category "Coins & Paper Money\Coins\ World\Europe\UK (Great Britain)\Gold". The seller is "thelondoncoincompany" and is located in London. This item can be shipped worldwide.