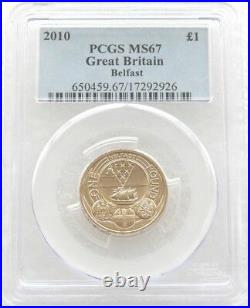 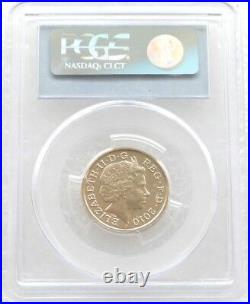 Weight: 9.50 Grams / Diameter: 22. Presented: Certified Slabbed and Graded by. The reverse of the Belfast Coin shows the coat of arms of Belfast which was used as early as 1643, but it was not until 1890 that the arms were granted officially. This means that in the upper part there is a silver bell on a small red cornerpiece or'canton', and a larger triangular segment formed of interlocking blue and white pieces in a specifically heraldic pattern known as'vair'. So it is scarcely surprising that a sea-going vessel should dominate the shield.

The bell in the upper part is a simple reference to the city's name and appeared on tokens issued by Belfast tradesmen in the seventeenth century. The Obverse design is the stunning portrait of Her Majesty Queen Elizabeth II by Ian Rank Broadley. Why is a Certified coin a better investment? PCGS & NGC are the main two impartial Numismatic Grading Services in the world and is a guarantee that the coin is genuine and has been graded accurately and professionally. The sonically sealed solid plastic slabb is individually numbered so that the details of the coin(s) can be verified on a central database, and is also tamperproof. This item is in the category "Coins\Coins\British\Decimal Coinage (c. The seller is "thelondoncoincompany" and is located in this country: GB.