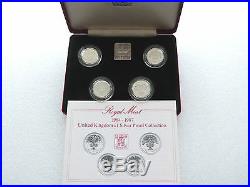 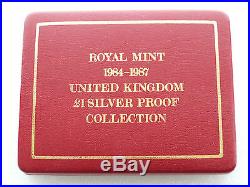 The four designs, adopted in turn for the years 1984, 1985, 1986 & 1987, representing Scotland, Wales, Northern Ireland and England. To commemorate this significant occasion in the history of the United Kingdom coinage, the Royal Mint has issued 50,000 Proof Coins in solid. 925 Sterling Silver of each design. Within this issue limit, a number have been reserved for inclusion in a four Coin Collection Case. The reverse designs, all including the Royal Diadem, show a thistle for Scotland, a leek for Wales, a flax plant for Northern Ireland and an oak tree for England.

These are the work of the distinguished silversmith, Leslie Durbin. The obverse of the Scottish coin bears Arnold Machin's portrait of the Queen, while the new effigy by Raphael Maklouf appears on the other three coins. These legal tender coins have been struck to proof quality using specially prepared dies and highly polished blanks. The item "1984-1987 Royal Mint British UK £1 One Pound Silver Proof 4 Coin Set Box Coa" is in sale since Saturday, August 31, 2019.

This item is in the category "Coins\Coins\British\Proof Sets/Coins\1980s". The seller is "thelondoncoincompany" and is located in London. This item can be shipped worldwide.