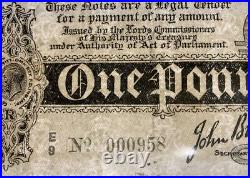 Designed by The Royal Mint from sketches by Sir Frederick Atterbury controller of H. Surface Printed by Waterlow Bros. & Layton in sheets of 36, plus extra notes in margins producing inverted and sideways watermarks. This was a rushed print job through necessity and lots of errors occured during printing, the stamp paper would have been difficult to control, and the practice of printing notes around the margins would have been a numbering nightmare leading to lots of waste. 127 x 63.5 mm.

Legal Tender until 12th June 1920. These "Emergency Issue" Banknotes were hurriedly produced over the extended Bank Holiday Weekend the day after The First World War started in August 1914. The Inland Revenue, Royal Mint and H.

M Treasury rushed through a rough design over the weekend of August 1st/2nd. John Bradbury secretary to the Treasury signed the design as it was impossible to obtain the King's signature in time. & Layton printers enlisted the help of Eyre & Spottiswode to make the plates and the numbering was sub contracted out to Blades, East & Blades of London.

De La Rue Printers were given the go ahead to produce 2.5 Million 10s notes that same day to be ready by Friday week , August 14th. Grading as accurate as possible - but please only use as a guide, please look at the high resolution photographs, and dont hesitate to get in touch if you need more information. Our Shop is being constantly updated. The item "£1 Treasury note T3-3 One Pound 1914 George V John Bradbury Scarce variety" is in sale since Friday, January 15, 2021. This item is in the category "Coins\Banknotes\British\English\Pre-1952".

The seller is "phil181159" and is located in Nuneaton, Warwickshire. This item can be shipped worldwide.